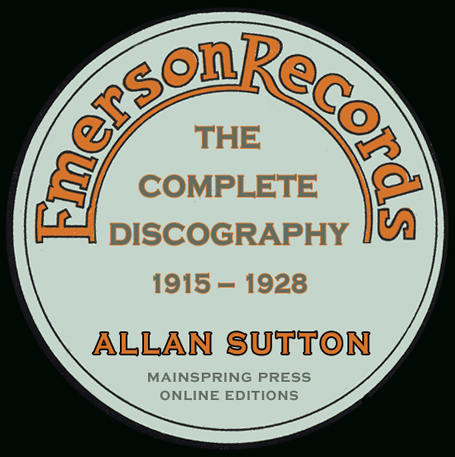 Edited and annotated by Allan Sutton

The first online version of Mainspring’s Emerson discography, Emerson Records begins with a thorough revision of the original print edition (ten- and twelve-inch issues), incorporating additions and corrections received since its publication nine years ago. To that, we’ve added what was to have been Volume 2, which was still a work-in-progress at the time Mainspring exited the book business: 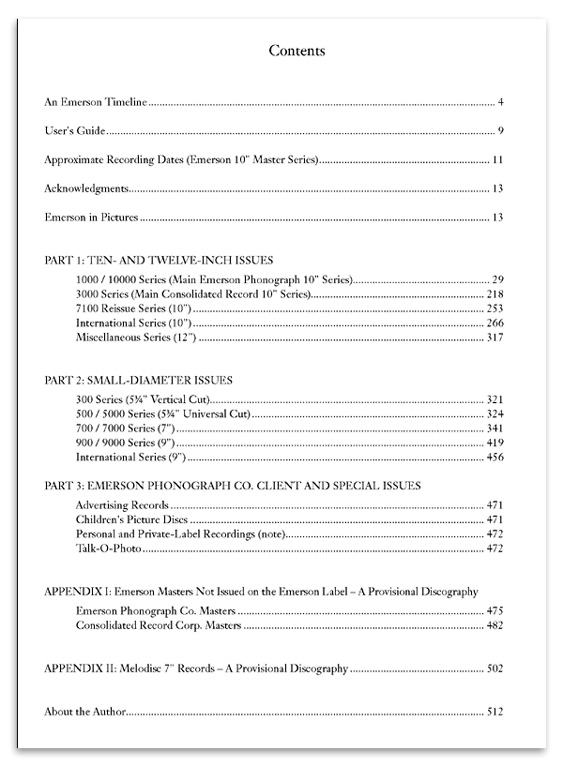 All currently confirmed corresponding issues on subsidiary and client labels are included (with takes and label credits noted individually for each record), along with a first attempt to document Emerson masters not issued on the Emerson label, and Emerson’s often-elusive Melodisc releases. Pages are fully searchable, and there are bookmark tabs to guide you to the various sections.

Because no discography of this size and complexity is ever truly “complete,” we will be updating Emerson Records and the other Mainspring online discographies as needed. Documented, verifiable revisions are always welcome and can be e-mailed to:

Emerson Records is the newest addition to the Mainspring Press Online Reference Library, a free service for collectors and researchers of historic sound recordings.

Files may be downloaded free of charge for personal, non-commercial use only. All are copyrighted material, and unauthorized reproduction, alteration, distribution, and/or commercial use is prohibited. Please be sure to read and abide by the user conditions noted in each file, so that we can continue to offer this service. 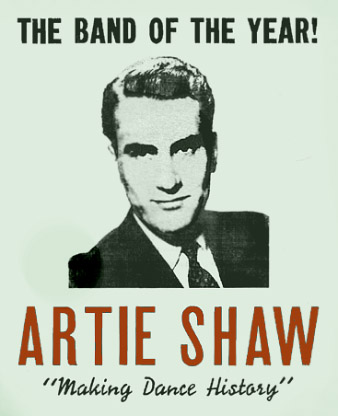 Who the hell are you and what the fuck do you want from me?

Well, I want to ask you questions about your career, and specifically about —

You’re a little late, sonny … I quit being Artie Shaw twenty years ago. I’m through talking about my “career,” as you called it.

Well, then, what would you like to talk about?

Target shooting. Which you don’t know shit about …

… And so begins one of Artie Shaw’s most outspoken and provocative interviews, which despite Shaw’s initial refusal to discuss his musical career, soon turns to just that. Conducted in-person in Shaw’s “gun room,” the interview is presented here uncut and uncensored. 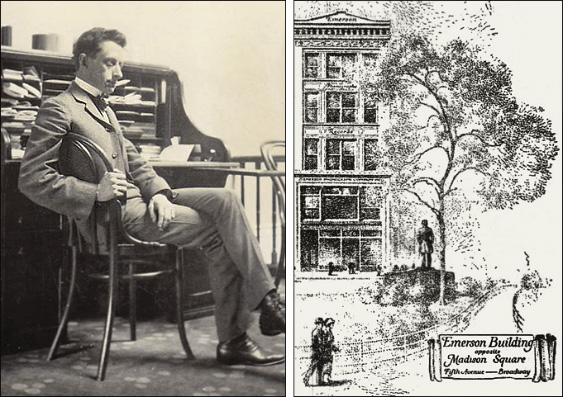 The followup to Mainspring Press’ 10″ / 12″ Emerson discography (published in 2013, and long out-of-print), The Complete Emerson Discography has been thoroughly revised and expanded to include all of the small-diameter issues, with input from some of the field’s leading collectors and researchers.

Also included are details of Emerson masters that were never issued on the Emerson label, including the recordings made especially for Panhellenion, Polonia, Constantinople, Marathon, Goodson, and Talk-O-Photo, among others. There’s also a provisional listing for 7″ Melodisc, the first systematic attempt to document that elusive label. Despite the many gaps that remain in the Melodisc listings, we are confident that it can be completed with the help of our many followers.

At more than 500 fully searchable pages, The Complete Emerson Discography will be free to download for personal, non-commercial use, as part of the Mainspring Press Online Reference Library.