Our thanks to John Bolig for the first fully detailed discography of the RCA-produced “World’s Greatest Operas” records. Data are from original RCA documentation at the Sony archives in New York. All issues were anonymous, but as you’ll see, some first-rate talent was employed.

John’s complete listing of RCA’s “World’s Greatest Music” records (a substantially revised and expanded version of our very basic  listing that was posted a few weeks ago) has also been posted.

Note that this listing is only for the original RCA-produced series. Other producers took over the “World’s Greatest…” series after the RCA Victor connection was severed in 1940. 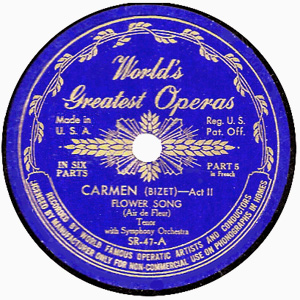