A few years ago, Phil (“Road Mangler”) Kaufman kindly loaned us his grand-dad Jack’s scrapbooks, a treasure-trove of clippings and memorabilia relating to the Kaufman brothers’ time in vaudeville, as well as Jack’s family life. Here are some highlights, along with a few additional nuggets we recently found among Bill Bryant’s papers.

Kaufman Brothers banner from the scrapbook’s inside back cover, c. 1910. The original act comprised Jack and Phil; Irving came in after the latter’s death in the late ‘teens. 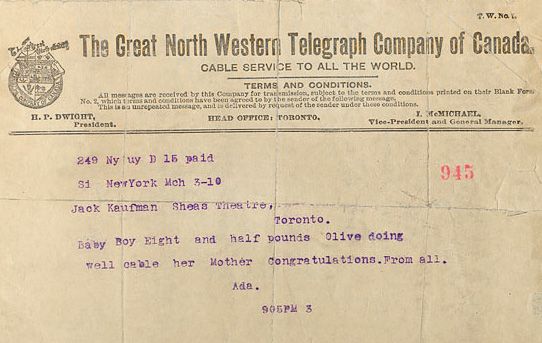 Telegram sent to Jack Kaufman while appearing in Toronto, announcing the birth of his son. (1910)

In the early days of their act, the Kaufmans regularly toured from coast to coast, but as the itinerary on the left shows, they later stayed close to home. Both pieces probably date to 1914, based on their position in the scrapbook. The misspelling “Kauffman” was not uncommon in newspapers. 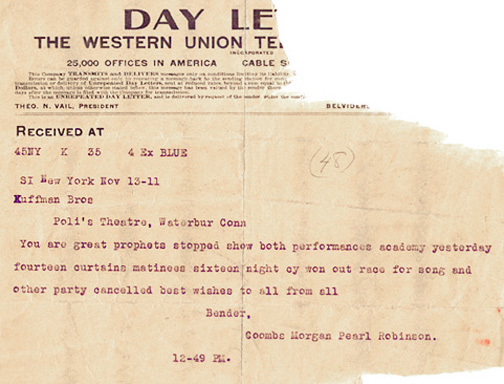 An early ad for the Kaufman Brothers picturing Jack (left) and Phil (right), c. 1910. Before signing with Orpheum, they toured on the Pantages circuit.

The Kaufmans were a favorite of newspaper caricaturists. These examples date from c. 1912–1914, when they sometimes  performed in blackface. “Palestine” refers to the town in Texas where the brothers claimed they picked up their “Southern” accents.

Phil and Jack Kaufman in blackface with unidentified others, c. 1912. This unfortunate component of the act was mostly mothballed after Irving replaced Phil in the late ‘teens.

After Phil’s death, Jack teamed with younger brother Irving, who had recently left the Avon Comedy Four. Irving and Jack were in  high demand by the recording studios. They worked cheap, weren’t picky about repertoire, and cranked out recordings by the hundreds, using so many aliases that new ones are still be discovered. Their cover of Gallagher & Shean’s Victor hit (“Absolutely, Mr. Gallagher?” “Positively, Mr. Shean!”) appeared on many minor labels. Regal’s ad pictured the actual Gallagher and Shean. (1923)

Work is where you find it — in this case as an “added attraction” at a Philadelphia movie house. (1922) 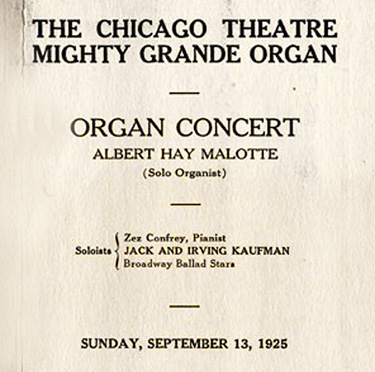 A hodge-podge of a concert at the Chicago Theatre, with selections ranging from a pipe-organ transcription of Wagner’s Rienzi Overture to a selection of current Tin Pan Alley hits by the Kaufmans.

This Chicago handbill probably dates from 1923–1924. Note the mention of Jimmy Wade, a popular black Chicago band leader who recorded some fine sides for Paramount at about this time.

The Kaufmans in a Vitaphone short (1927)