A few new favorites who’ve come to roost here in the past month, for your listening pleasure.

Be sure to check out the previous post about i78s.org, where you can now explore and stream more than 41,000 vintage discs and cylinders. Neat features: Transfers have been made at the correct playing speeds (which often is not 78 rpm), and you can switch between flat (unaltered) transfers, for purists; or judiciously processed audio for more pleasurable listening, with the worst noise removed but the original sound quality preserved. Registration is quick-and-easy, and it’s free. 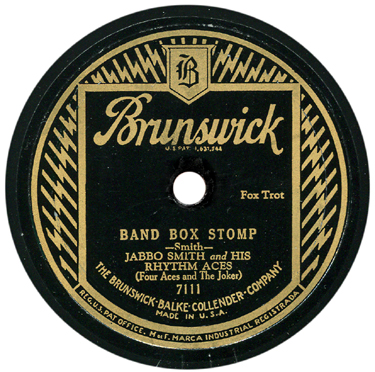 Personnel given for the Rhythm Aces sessions in various accounts are often at odds and don’t cite a credible documentary source (because there isn’t one; the Brunswick ledgers for this period don’t list personnel). So we’ll go with the personnel that Jabbo himself recalled for this side, as reported to the ever-reliable Dick Spottswood, to wit: Jabbo Smith (trumpet), Willard Brown (saxophones), Earl Frazer (piano), Ikey Robinson (banjo), Lawson Buford (brass bass). Memories get fuzzy, of course, but we’re much more inclined to trust someone who was actually there than folks from the “I hear so-and-so” school of research.

WALTER BARNES & HIS ROYAL CREOLIANS: If You’re Thinking of Me (EE+)

The vocalist is uncredited in the Brunswick ledger and on the labels (May Alix has been widely cited, based on aural evidence). An alternate take of “Birmingham Bertha,” without vocal, was recorded at the same session, for release in Germany.

.
Louis Armstrong’s Hot Five, with George Mitchell substituting for Armstrong (who was under exclusive contract to Okeh at the time). Columbia originally logged this session as “Armstrong’s Band,” then changed it to “Johnny Dodds and the New Orleans Wanderers,” although Dodds’ name was omitted from the labels. (“Trans. to 5008-S” refers to a late-1940s reissue on the Special Editions label.)

.
Three of the (unintentionally) funnier tracks from a six-track disc plugging the new 1934 Chevrolet with “knee-action” front wheels. Sound Studios of New York was a custom-recording operation associated with the World Broadcasting System.

This is the scarce original version (takes 2 and 3 were mastered; the take used is not indicated in the pressing). It was quickly replaced by the more commonly encountered remake of August 31, 1910. The arranger added an awkwardly positioned repeat at the 1:38 mark to stretch the playing time of Victor Smalley’s little gem.