Edited and Annotated by Allan Sutton

Free for personal, non-commercial use only

Keen-O-Phone, Rex, and Imperial Records is just one of the many titles available for free download in the Mainspring Press Online Reference Library. Browse the Catalog Page for all current offerings in this ever-expanding list of discographies and other reference works for collectors of historic sound recordings, courtesy of some of the leading researchers in the field.

Latest Additions to the Phono-Cut Discography

Thanks to Robert Johannesson (Kristianstad, Sweden), we now have additional details for the following issues in The Phono-Cut Discography:

These and other recently received additions will be incorporated in our next full revision of the discography (V.3), tentatively scheduled for early November. Our thanks for all who have taken the time to respond.

It now appears almost certain that the “0” characters following many of the master numbers are take indicators. If so, that raises the question of whether “0” indicates take 1, or the absence of “0” indicates take 1 (in which case, “0” would be take 2, “00” take 3, etc. — similar to Gennett’s use of no letter for take 1, “A” for take 2, etc.). The relative rarity of “000” markings suggests the latter, but that is still just a guess at this point.

Browse the Mainspring Press Online Reference Library for more discographies, all free to download for personal, non-commercial use.

The Champion Records Identification Guide is the first offering in the new Mainspring Press Archive Series.

This series will post material in our archive “as-is” — scanned directly from the original documents, without editing or alterations — as a first step toward developing them into fully edited final works.

Other projects currently under consideration for the series include additional manuscripts by George Blacker, Carl Kendziora, and other members of the original Record Research team; the more interesting portions of the Gennett master ledgers; Helene Chmura’s reconstruction of the American Record Corporation master ledgers; and Perry Armagnac’s transcription of the Ed Kirkeby session and payroll books (made under Kirkeby’s personal supervision).

We encourage collectors and researchers to submit verifiable additions and corrections, from first-hand observation of the original discs or ancillary materials. Submission information will be found in the file.

You are welcome to print out and circulate this file for personal research purposes; but as with all Mainspring online publications, sale or other commercial use is prohibited.

.
The latest version of the Phono-Cut discography is now available to download free for your personal use. Our thanks to Robert Coon, Glenn Longwell, and Steven Nordhougen, who contributed significant new data to Version 2.

Phono-Cut is an ongoing project, and we welcome additions and corrections (preferably with label photos or scans for verification) for future updates. Information on submitting data will be found in the file.

Phono-Cut Records is a part of the free
Record Collectors’ Online Reference Library,
courtesy of Mainspring Press, the leader in forensic discography.

This copyrighted publication is intended for personal, non-commercial use only. Unauthorized reproduction or distribution by any means, including but not limited to e-book or online database conversion, is prohibited. Please read, and be sure to observe, our terms of use as outlined in the file, so that we can continue to offer these free publications.

Edited and annotated by Allan Sutton

The Keen-O-Phone Company was part of the first wave of American vertical-cut record producers in the early 1910s. Too early to market, with little demand having yet developed for vertical-cut  products, Keen-O-Phone suspended operations in early 1914. Its assets were leased by a new company, the Rex Talking Machine Corporation, which took up production where Keen-O-Phone left off.

After a series of financial ups and downs (detailed in the discography’s introductory timeline), Rex was forced to liquidate in early 1917. A group of its stockholders and creditors purchased the company’s assets and resumed operations under the Imperial Talking Machine Company banner. But the new venture fared no better than its predecessor, and after failing in early 1918, some of its assets were acquired by Otto Heineman in preparation for launching his new Okeh label.

Fred Hager retained possession of the masters, which he sold to any unnamed purchaser in the 1930s. They’ve long-since vanished, along with the Keen-O-Phone, Rex, and Imperial files. Therefore, this is a “forensic discography” (an apt term coined by David Giovannoni), a reconstruction compiled from first-hand observation of the original discs, catalogs, and ancillary materials.

George Blacker began work on this project in the 1960s, with support from members of the Record Research group (Walter C. Allen, Carl Kendziora, Len Kunstadt, et al.) and, later, William R. Bryant and his circle of trustworthy collaborators. The completed discography, published here for the first time, has been updated, edited, and annotated by Allan Sutton, with significant revisions and additions contributed by David Giovannoni and Ryan Barna.

This work is offered for personal, non-commercial use only. Sale or other commercial use, as well as any other unauthorized reproduction, distribution, or alteration (including conversion to digital databases or e-books) is prohibited. Please read and honor the conditions of use included with this file, so that we can continue to offer these free publications.

Winner of the 2019 ARSC Award for Excellence in Historical Recorded-Sound Research, this unique volume contains more than 1,100 entries covering the record companies, independent studios, and individual producers — and the thousands of disc and cylinder brands they produced for the commercial market (including consumer, jukebox, and subscription labels) — from the birth of commercial recording to the start of the LP era.

“A mighty fortress is this book – and it guards an accumulation of knowledge of unparalleled proportions.”
– Tim Fabrizio, ARSC Journal

“American Record Companies and Producers will forever be the ultimate resource.”
– John R. Bolig, author of The Victor Discographies

“I am in awe of the scope, breadth, detail
and documentation.”
– James A. Drake, author of Ponselle: A Singer’s Life and Richard Tucker: A Biography

Compiled by George Blacker with the
Record Research Associates

One of the late George Blacker’s many projects that never saw publication, The Okeh Vertical-Cut Discography was compiled from firsthand inspection of the original discs, with the assistance of members of the Record Research group. We are pleased to finally be able to offer it, especially since it adds substantially to the rather sketchy material in Laird & Rust’s Greenwood Press discography.

This discography is being offered free of charge for personal use only. Reproduction or other use exceeding customary fair-use standards is prohibited without the prior written consent of Mainspring Press. Please e-mail us with any questions concerning fair use, or with corrections and additions.

Some of these recording were also issued under the Rishell label in the U.S., and the Phonola label in Canada. These issues, for which we are still gathering and fact-checking data, will be added in a later update to the discography. 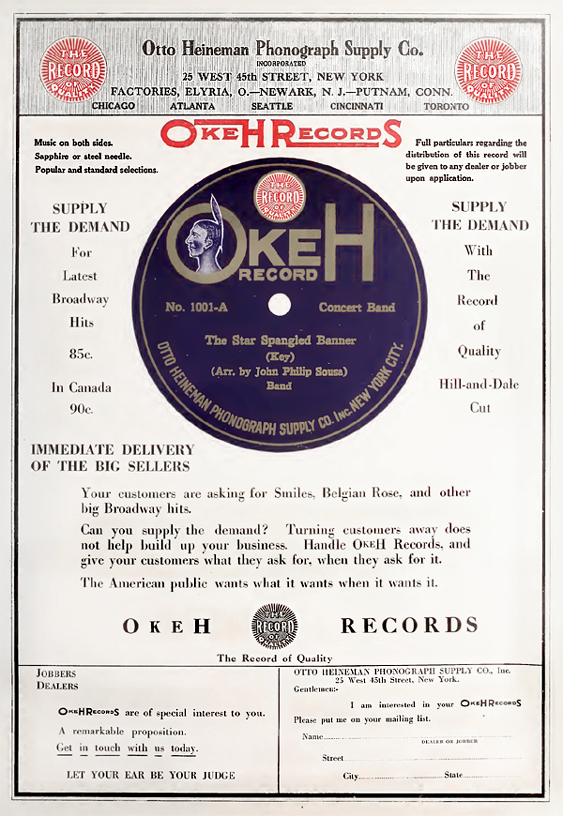 In addition to distributing Okeh records, Rishell briefly marketed some Okeh pressings under their own label.