One aspect of Fletcher Henderson’s career that’s been generally overlooked by most of his biographers is his use of “satellite” bands — those second-string groups that busy bandleaders dispatched  under their names to tour the boondocks or play low-prestige events like college and civic-group dances. This was a common practice in the 1920s, known to have been engaged in by Harry A. Yerkes*, Ed Kirkeby, and other popular band leaders and managers.

The first mention of a suspected Henderson satellite band appeared in March 1925. Henderson’s Rainbow Orchestra, it was reported, was a new unit that would “bid for popular favor against Mr. Henderson’s original Roseland Orchestra.” 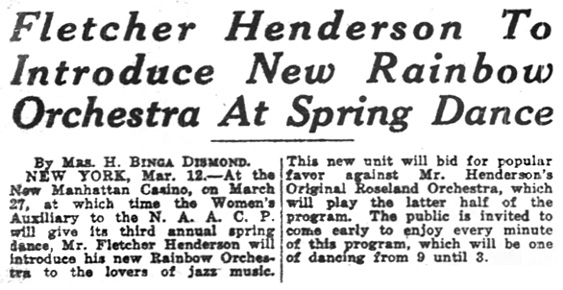 Whether Henderson’s Rainbow Orchestra was a separate unit, as the article suggests, or perhaps just a small group drawn from the main band, remains unclear. No recordings credited to Fletcher Henderson’s Rainbow Orchestra are known. The name (sometimes spelled “Rainbo”) appeared in newspaper ads off-and-on for a few months, mostly in connection with a touring band that played the smaller cities in Pennsylvania and central New York state.

There is far more certainty surrounding Fletcher Henderson’s Collegians. This appears to have been a group of younger musicians who were employed primarily as a touring band. The name first appeared in the autumn of 1925, with one advertisement describing the group as “A Fletcher Henderson unit of young colored boys full of ‘pep.’” 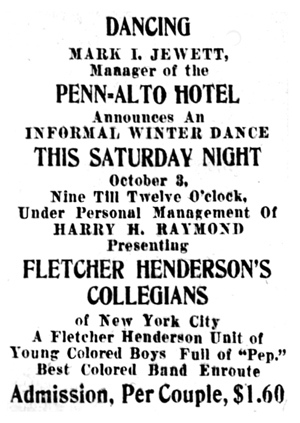 Based on strong circumstantial and aural evidence, it seems virtually certain that the Collegians were a Henderson satellite band. There are confirmed instances of the group appearing in far-flung locations on the same dates that Henderson’s main band is known to have been performing, recording, or broadcasting in New York city. The Plaza Music Company released three very un-Hendersonlike sides credited to Fletcher Henderson’s Collegians, and they can come as a bitter disappointment to unwary collectors. The mundane stock arrangements and total absence of Henderson’s own readily recognizable soloists strongly suggest that these recordings were the work of a band that was his in name only:

FLETCHER HENDERSON’S COLLEGIANS (Andy Razaf, vocal):
Dear, On a Night Like This

Ads for Henderson’s Collegians vanished in early 1928. In the meantime, another apparent satellite band had surfaced — Fletcher Henderson’s Stompers (not to be confused with The Dixie Stompers, an alias that Columbia used to mask the actual Henderson band, or a small unit derived from it, on its low-priced Harmony and Velvet Tone labels). Ads for the Stompers began appearing in the autumn of 1927. An article from October of that year reported that Henderson’s brother Horace was directing the group: 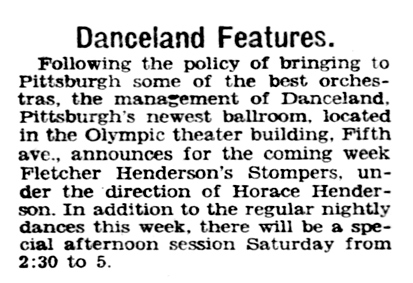 The Stompers’ itinerary is well documented in newspapers of the period. Like the Collegians, they are known to have been traveling on some dates when the main Henderson band was performing or recording in New York or Chicago. Occasional ads declaring that “Fletcher Henderson himself” would appear suggest that his presence with the group might have been something out of the ordinary. The Stompers spent the autumn of 1927 and early winter of 1928 crisscrossing Pennsylvania and parts of New York state. Aside from Pittsburgh, the band played mostly smaller cities and college towns. 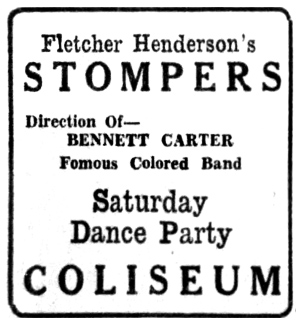 One Bennett Carter took over direction of the Stompers in the summer of 1928. Better known to modern listeners as saxophonist and arranger Benny Carter, he began working with  Fletcher Henderson’s main band later that year, playing a key role in reshaping what had become a rather slipshod outfit following Henderson’s late-August auto accident.

* Not the same individual as Hulbert A. Yerkes, a Columbia records executive who went by the initials “H. A,” causing some writers to conflate the two.