A Provisional Discography
by Allan Sutton 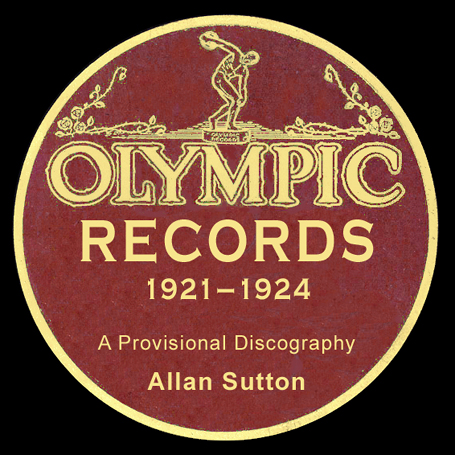 Now long-forgotten, John Fletcher failed at virtually every commercial venture he undertook, and yet he managed to produce some interesting records in the process. The Olympic label would be produced by three different Fletcher-backed ventures in rapid succession, over the span of just four years — including one in which Black Swan’s Harry Pace found himself unfortunately entangled after what seemed like a promising start.

Attempts to produce a definitive Olympic discography have been ongoing since the early 1950s, when a group of collectors and researchers affiliated with Record Research magazine began compiling detailed data on Olympic and related labels from first-hand inspection of the original discs. Black Swan: The Record Label of the Harlem Renaissance (Thygesen, Berresford, and Shor, 1996) included the first commercially published Olympic discography, albeit a somewhat sketchy one. It served well as a very basic starting point, but much work remained to be done. The opportunity to do so finally arose after Mainspring Press acquired the Record Research group’s discographical data, which have now been merged with more recent findings from other equally trustworthy contributors to produce the discography.

The discography contains details of all records originally marketed by the Olympic Disc Record Corporation, Fletcher Record Company, and Capitol Roll & Record Company, including client-label and other derivative issues. It is still very much a provisional discography at this point — a first attempt to sort out and disseminate what is currently known for certain concerning these records. It also identifies and corrects some misinformation found in several well-known jazz and dance-band discographies, which has been debunked through synchronized aural comparisons of the Olympic recordings to supposed matches on other labels.

An introductory essay covers Fletcher’s career during this period and clarifies his business relationship with Harry Pace and the Black Swan operation. Black Swan collectors  will find some fresh surprises, with a number of the Fletcher-period Black Swan issues now definitively traced back to World War War I-era Pathé recordings that found their way onto the label via Fletcher’s old universal-cut Operaphone dubbings. And for newer arrivals to collecting, you’ll find all the information you need to keep you from paying a king’s ransom for “Henderson’s Orchestra” or “Ethel Water Jazz Masters” Black Swans that are really just white dance bands from the Olympic catalog in disguise!