Ironically, Mainspring Press is located in a state that was (and largely still is) a dead-zone as far as commercial recording activity. The state’s first venture — the Colorado Phonograph Company, founded in 1889 and merged with the Utah Phonograph Company the following year — was a financial flop that quietly perished without having produced any known original recordings. It would be more than a half-century before Colorado finally could boast of its own commercial labels, albeit very minor ones.

Nevertheless, there are a couple of early disc labels with at least tenuous Colorado connections. The John Stenzel label, from what was then the small farming town of Windsor, still turns up on occasion in northern Colorado and southern Wyoming: 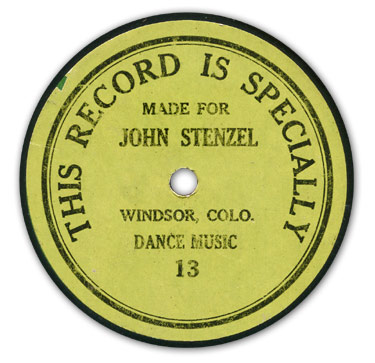 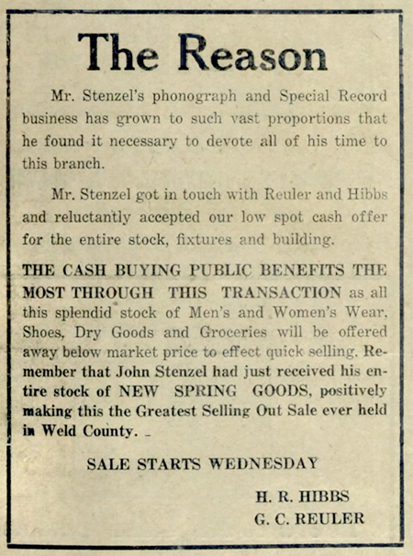 The Stenzel records appear to have been used as premiums, given away with the purchase of “special” Stenzel phonographs. The only example we’ve seen of these machines was a “stenciled” Columbia product similar to the model pictured below:

The Stenzel discs, despite the label claim, were not “specially made” for him, and they have no Colorado connection per se, other than having been sold here. The examples we’ve seen are all standard Columbia E-series discs over which Stenzel pasted his own labels, and none show titles or artists. The few that we’ve heard are recordings of German oom-pah bands (The Windsor Beacon once noted that Stenzel’s clientele were largely “Germans”). The records were likely old surplus stock that Columbia and/or Stenzel had no better way of moving.

Our next specimen — the Colorado Scholarship Fund label of 1916, produced in conjunction with a Denver newspaper — has more substantial Colorado roots, although it was also a Columbia product: 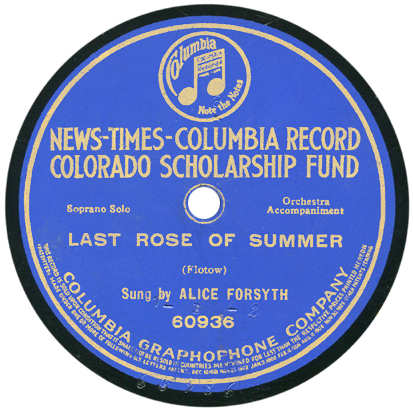 Long before The Voice, American Idol, or even Major Bowes’ Original Amateur Hour, there was the Colorado Scholarship Fund Contest of June 1916 — possibly the first amateur-talent contest for which the reward was a record deal, of sorts. The contest was widely publicized by the local press. Even The Talking Machine World, the foremost recording-industry trade paper of the day, covered it in detail. The event proved to be so popular that it was later staged in other cities.

The winners were Alice Forsyth and Chauncey Parsons. Their  record still turns up often in Colorado — generally to the disappointment of collectors, since aside from the interesting-looking label, it’s pretty dreadful (so much so, that we won’t post the sound-files, out of respect to two artists who were caught at an awkward stage in their development). In defense of Forsyth and Parsons, both were true amateurs at the time, and Forsyth reportedly was recovering from throat problems.

For all of its musical shortcomings, the record appears to have sold very well. It didn’t lead to a regular Columbia contract for either singer, and it was numbered in Columbia’s Personal Record series, thus ensuring that it would never be listed in a Columbia catalog. But apparently the experience encouraged Forsyth and Parsons to pursue professional careers. Both took up vocal studies at Denver’s Wilcox Studios shortly after the record’s release.

Forsyth remained in Denver until late 1919, when she joined the All-American Opera Company on tour, as an understudy to Anna Fitziu. By the early 1920s she had married and settled in Los Angeles, where she became a fixture on the local concert circuit and taught at Davis Musical College.

Parsons joined the Jambon Players, a group that entertained the troops overseas during World War I, then settled in Pittsburgh. In addition to regular concert and church work, he was a radio pioneer, broadcasting regularly over station KDKA beginning in 1921. During 1927–1928 he appeared on Broadway in Artists and Models, which ran for 151 performances at the Winter Garden. In the later 1920s he had his own program on KDKA and was a featured star on NBC’s Yeast Foamers program during 1929–1930.

For more on the Colorado Phonograph Company, and the stories behind Colorado’s 1940s labels and recording operations (including Columbine, Dudley, Pikes Peak, and the Karl Zomar Library), be sure to check out American Record Companies and Producers, 1888-1950, available exclusively from Mainspring Press or Nauck’s Vintage Records. This is a special limited edition that we’re not making available to Amazon.com or other distributors or retailers — order soon to avoid missing out: 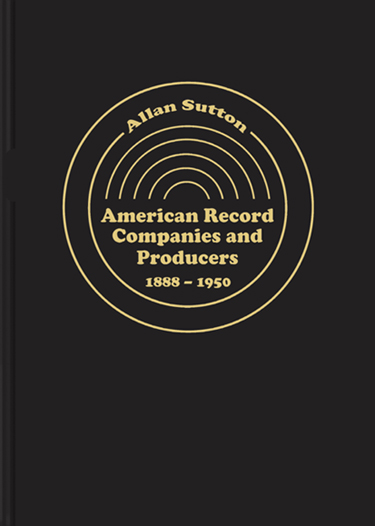