A couple of interesting pieces from the Standard Talking Machine Company of Chicago have arrived recently that are worth sharing. (For the full story of Standard and related businesses, see our posting on the Chicago Premium Scheme Labels.)

The first is a 1909 letter, from Standard to a retailer who had requested Hungarian records that Standard did not stock. Standard’s reply was that they could make special arrangements  with Columbia to customize existing records for Standard machines, raising the possibility that special Standard-labeled discs might exist that don’t appear in the Standard catalogs: 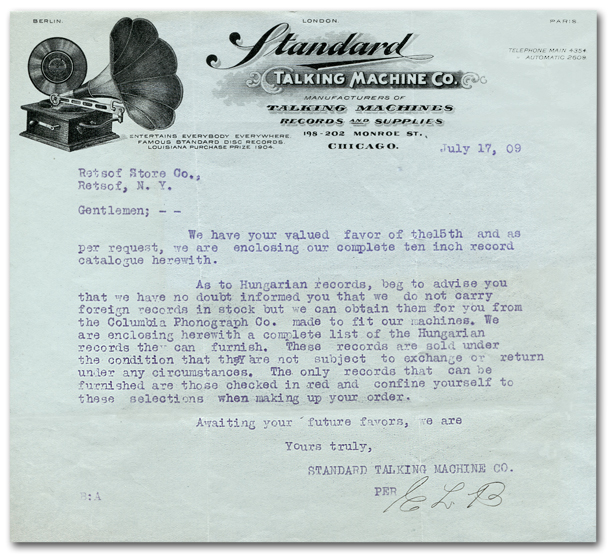 Customizing would not come cheaply. A later message from Standard to the same dealer noted that dealer cost would be 65¢ per disc for the foreign-series titles (in other words, close to full retail), rather than the 50¢ charged for regular releases. Add the shipping charges, which Standard passed on to its dealers, and there would have been little profit in the custom pressings.

Presumably, Columbia would have been willing to make the same accommodation for other foreign-catalog (E-series) records, although we’ve yet to see any E-series discs, Hungarian or otherwise, with Standard labels. It seems far less likely that Columbia would have been willing to customize any domestic (A-series) material not already in Standard’s catalog, especially since much of its higher-priced talent was off-limits to Standard.

The next item is a 1911 envelope picturing the Standard Style X machine, put out by a photographic firm that offered the machine for free (most likely in exchange for credits or coupons that would have been given out with each purchase of specified goods or services, a common giveaway scheme). What’s unusual — aside from the substitution of a cheaper horn for the usual morning-glory — is the rather klutzy bent-rod arm support, replacing the normal, more graceful, cast-aluminum support. 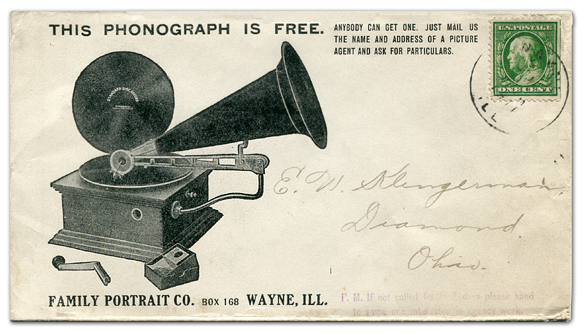 The illustration on the envelope has been reproduced from a photograph, so clearly this bent-rod support existed; but we’ve yet to see one, or even a modern photo of one, on any Standard front-mount. Anyone have an actual example of this support, or information on when or why it was used?