A sobering look at Bix Beiderbecke’s final years, after his drinking became unmanageable and he was put on what would turn out to be permanent leave by Paul Whiteman. Back in Davenport, Beiderbecke was reduced to living with his parents and playing college and social-club dances with obscure local bands. There were sporadic, unsuccessful attempts at a comeback — in September 1930 he cut three sides in New York credited to Bix Beiderbecke & his Orchestra (actually a Victor studio creation under the direction of others) that received polite reviews but failed to sell, and in the spring of 1931 he returned briefly to Jean Goldkette’s orchestra in Detroit. But ultimately, he was unable to overcome his addiction, and he died in New York in August 1931. 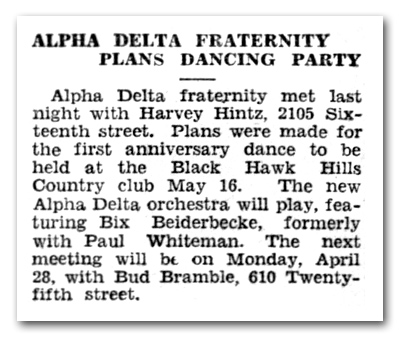 Davenport, August 7, 1931. The portraits were taken approximately five or six years apart, the lower one being from his early Wolverines period.