Stripper in the Board Room: Winnie (“The Flaming Redhead”) Garrett and the Famous Record Company

Winnie Garrett, a.k.a. “The Flaming Redhead,” served as vice-president and promotions manager of Famous Records, Inc., beginning in 1947.

To all appearances, the Famous Record Company was a rather dodgy operation. Its first label was copied from Brunswick’s 1920 design (although there was no connection to that company), suggesting a much earlier operation than was actually the case. Even the company name was copied; it had been used several years earlier by an unrelated New York venture that marketed cheap picture discs containing sound track excerpts by Hollywood stars before disappearing. Famous received little coverage in the trade papers, and early labels gave its location only as “U.S.A.” (its mailing address was  Room 303 of the RKO Theater Building at 6 Market Street, in Newark, New Jersey).

The original Famous label was copied from Brunswick’s long-abandoned 1920 design, although there was no connection to that company. It was later redesigned.

To date, no reliable contemporary account of the Famous Record Company’s launch has been found, but its initial releases on the Famous label — four sides by Phil Napoleon’s Orchestra, accompanying singers Ross Leonard and Roma Lynn — were reviewed in late November 1944. Billboard critic M. H. Orodenker rendered a mixed verdict:

“Still another disk label enters the fold, this one springing from Newark, N. J. For its bow, [it] brings back Phil Napoleon for the music making… Napoleon provides a highly attractive setting for the romantic baritoning of Ross Leonard. Warbler goes all out in dramatic style for “I Dream of You,” dragging it out no end and negating much of the disk appeal of one of the better ballads of the moment. However, Leonard listens to better advantage when keeping within rhythmic confines for two new ballads… Remaining side, an innocuous rhythm ditty in ‘Rhythm Has Got You Too,” provides the hot hymnaling of Roma Lynn. However, none in the company can distinguish themselves with the song.”

Famous’ artist roster, drawn largely from New York and New Jersey nightclubs, was soon expanded to include Jerry Delmar’s Orchestra, Margie Hudson, Jim Messner, and Tommy Ryan. But the Famous Record Company did virtually no advertising, and little more was heard of the venture until early 1947, when it resurfaced in Billboard‘s manufacturers’ directory as Famous Records, Inc.

Operating at the same Newark address, the reorganized company launched a new series of Famous records late that autumn.  Several new distributors were secured, and the company began advertising on a modest scale, primarily to jukebox operators. It was not an opportune time to re-enter the record business, with the second American Federation of Musicians’ recording ban looming. The trade papers were filled with accounts of record companies stockpiling masters in advance of the ban, but Famous was not among them.

The initial release in Famous’ new FA-600 series (“The Stars Were Mine” / “Are You Havin’ Any Fun,” by Freddy Miller’s Orchestra) earned faint praise from a Cash Box reviewer in November 1947 as a “pair of sides that [jukebox] ops may use to fair advantage.”

The redesigned Famous label and a November 1947 ad for the new FA-600 series, launched around the time of Winnie Garrett’s buy-in. Freddy Miller and Janet Parker were among the Famous artists that Garrett took to Connecticut, for an appearance on behalf of the Damon Runyon Memorial Cancer Fund, in March 1948.

One of the reorganized company’s investors was Winnie Garrett, a twenty-five year-old burlesque strip-tease star billed as “The Flaming Redhead.” News reports suggest that she had invested around November 1947, corresponding with the label’s relaunch. Garrett was given with the title of vice-president and promotions manager. Billboard reported that Garrett made so little money from the company, she could not afford to retire from the stage. Instead, she maintained two careers, representing Famous Records by day while continuing to strip at night. 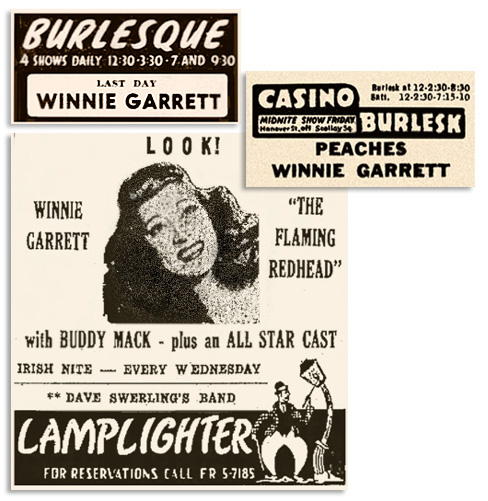 Initially, Garrett’s main duty was to secure plugs for Famous records from local disc jockeys, but by 1948 she was taking a more active role in the operation. In March of that year, she and several Famous artists traveled to Bridgeport, Connecticut, for an appearance on behalf of the Damon Runyon Memorial Cancer Fund. In June, she sued 20th Century Fox for $150,000 over its portrayal of a fictitious Famous Records company (which goes bankrupt) in the film, “You Were Meant for Me,” alleging damage to her company’s financial reputation. By then, newspapers were referring to Garrett as the “head” of Famous Records. However, new releases stalled as the AFM ban dragged on.

Garrett appears to have undertaken an image makeover at that time, offering a toned-down version of her act with mixed results. In November 1948, she was arrested at New York’s Club Ha-Ha for presenting a “lewd and indecent performance.” The incident was widely covered by the local papers:

“[Garrett] told reporters the performance that led to her arrest early today was an ‘interpretive dance.’ At first she wasn’t sure just what it interpreted, but finally decided it has ‘a little African in it’… She explains that she begins the dance wearing an evening dress, gloves, three brassieres, an under-skirt, and peace-net panties. She ends, she said, with one brassiere and g-string panties.”

The charges were dropped after the arresting officer admitted that Garrett had not been totally nude, as he had originally thought. After noting that the same performance had failed to raise any objections in staid Boston, Garrett promised to clean up her act and invited the officer to visit the Club Ha-Ha every night to make sure her dance was “more conservative.” We don’t know if he took her up on the offer.

In May 1950, Garrett sued photographer Murray Korman for mental anguish and distress after he placed photographs of her on penny peep-machines. By then, Famous Records appears to have been inactive for some time, having failed to garner much attention for anything other than Garrett’s presence. She continued to perform into the mid-1950s.

© 2018 by Allan R. Sutton. All rights are reserved. Full details of the Famous Record operation will appear in the author’s American Record and Producers, 1888–1950, currently in preparation for publication.