Boston Talking Machine was launched in the spring of 1910 by  Josiah B. Millet (an acoustic engineer, inventor, and publisher of The American Business Encyclopaedia and Legal Advisor) and was financed largely by Henry and Henrietta Whitney. Millet assembled a stellar staff, including George Cheney, formerly of Zonophone and Sonora (recording engineer); Louis Valiquet, formerly of Zonophone (consulting engineer); Loring Leeds, formerly of Leeds & Catlin (general manager); and Fred Hager, formerly of Zonophone (musical director). Isaac W. Norcross was also briefly associated with the venture but severed the relationship in August or September 1910. The company produced Phono-Cut discs, probably the third American vertical-cut label to be introduced (preceded by Sonora and Sapphire).

Boston Talking Machine’s Little Wonder phonograph was a compact device with cast-iron base and a reproducer that could be rotated to play either vertical- or lateral-cut discs. The tonearm terminated within a small pivoting external horn, from which the sound was reflected. It was distributed by the Wonder Sales Company, whose only known catalog included a long listing of Phono-Cut records.

Boston Talking Machine’s Little Wonder phonograph, with the reproducer in vertical-cut position (from Tim Brooks & Merle Sprinzen’s Little Wonder Records and Bubble Books, Mainspring Press). The ads are from 1912 (middle) and 1913 (bottom), the latter just before the name was changed to Wondrola.

.
Around June 1913, for reasons that remain undiscovered, the Little Wonder phonograph was renamed Wondrola. The change apparently had nothing to do with Little Wonder records (a Columbia product that would not be introduced or trademarked for another year) but coincided with Boston Talking Machine’s growing  financial troubles. The company had discontinued recording in early 1913, and during the summer it lost its largest retailer with the closing of Chicago’s O’Neill-James Company. On October 2, Boston Talking Machine  was placed in receivership. According to Henry Whitney, the company was “financially embarrassed and unable to meet its obligations.” 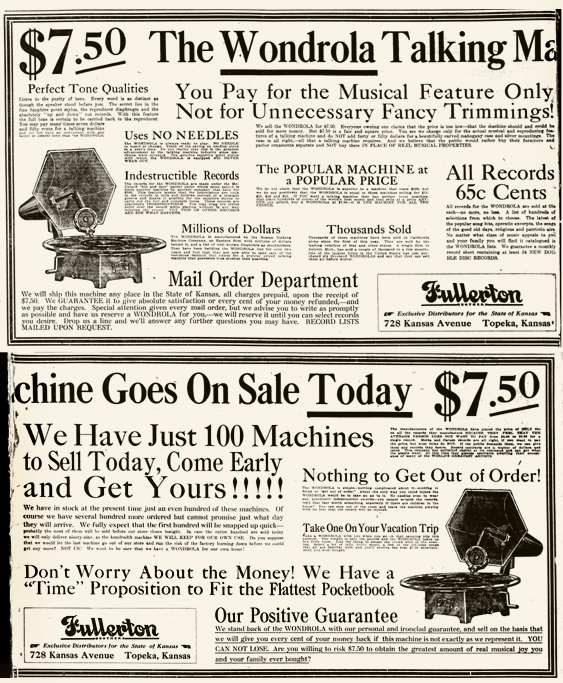 Around June 1913, the Little Wonder machines began to be marketed under the Wondrola name. By then, Boston Talking Machine was failing financially and just a few months away from being placed in receivership.

Charles E. Whitman purchased Boston Talking Machine’s assets in January 1915, for $30,000. The Phono-Cut masters were sold to the Starr Piano Company’s Fred Gennett, who reissued selected titles on Remington, a short-lived, inexpensive side-line to Gennett’s Starr label. Contrary to some hobbyists’ accounts, the Keen-O-Phone Company did not acquire or reissue Phono-Cut masters.

In November 1915, the remaining Phono-Cut pressings were sold to the Wonder Talking Machine Company (New York), a newly formed venture headed by former U-S Everlasting executive Harry B. McNulty. The company issued a catalog of long-deleted Phono-Cut discs in April 1916, which retailed for just 25¢ each (40¢ less than the original list price), but its main offering was a new line of  Wondertone lateral-cut phonographs: