The Gennett Record Gazette was a nifty promo publication filled with photos, release lists, facts, and “alternative facts.” Here are a couple of excepts from Vol. I, No. 4 (April 1924) — one correcting a likely error in Johnson & Shirley’s American Dance Bands on Records and Film, and the other opening a discographical can of worms.

Joie Lichter’s and Bob Tamm’s Milwaukee orchestras visited Gennett’s Richmond, Indiana, studio on March 4, 1924 — Lichter recording five sides, with Tamm squeezing in a single title midway through the session, according to the Gennett ledgers. (“Tamm” or “Tamms”? It appears both ways in press reports and ads of the period, but “Tamm” is favored by a good margin.)

For god-only-knows what reason (since its compilers give none), ADBRF lists the Tamm side as a pseudonymous Lichter recording, even though the ledger, and the detailed information reported below, make that seem unlikely. For what it’s worth, Brian Rust credited the Tamm side to Tamm in his earlier  American Dance Band Discography, from which ADBRF was largely taken. If anyone can offer any credible reason for the change in ADBRF (credible excluding things like “so-and-so is sure he hears such-and-such” or “Joe Blow remembers that somebody said…”), please let us know, and of course be sure to cite the source. If it checks out, we’ll be happy to post it.

Our next excerpt involves the ubiquitous Bailey’s Lucky Seven. For years it’s been taken for granted that this was a Sam Lanin group, and aural evidence does strongly suggest that was the case on many sides. Many others, however, are more generic-sounding. Unfortunately, the Gennett ledgers offer no clues in either case. (Note that the Bailey’s personnel listings in the various Rust and Johnson & Shirley discographies are all conjectural, even if the authors don’t make that clear. None of it is from file data or other primary-source documentation.)

But here we have one “Gene Bailey, of Bailey’s Lucky Seven” running a question-and-answer column in the Gennett Record Gazette. Not surprisingly, “Bailey” gave no answer whatsoever to the fan’s question concerning the Lucky Seven’s personnel, or where the band was performing, other than a vague reference later in the column to one “Saxophone Joe.”

So, was there a real Gene Bailey involved with these recordings, and if so, in what capacity? Or was this just yet another case of the Gennett folks having fun with pseudonyms? We favor the latter, since we’ve found no trace of a Gene Bailey having been  active on the New York-area musical scene, either as a musician or a manager, at the time. (These were all New York recordings.  The cartoon above, by the way, is based on a well-known 1923 photo taken in the New York studio, which was configured differently than the Indiana facility).

There’s an old anecdote about Gennett borrowing the names of employees or other locals for its artist pseudonyms. And a Gene Bailey does turns up in the social notices of several eastern Indiana newspapers at the time, although with no mention of any musical connection. But just to muck things up a bit, Gennett once issued a record credited to “Jene Bailey’s Orchestra,” claiming (in the ledger as well as in their ads) that Mr. Bailey personally conducted the side:

Of course, much of Gennett’s promotional material should be taken with the proverbial grain of salt. This was, after all, a  company whose “Colored Records” catalog included a photo of an unknown black band that was captioned “Ladd’s Black Aces” — a confirmed pseudonym on Gennett for the all-white Original Memphis Five.

While we’re on subject, here’s a terrific book that all Gennett fans should own, by Charlie Dahan and Linda Gennett Irmscher (Arcadia Publishing). It’s available on Amazon.com, and a real  bargain at just $21.99 — crammed with rare photos and little-known facts, and covering a much broader scope than the earlier Kennedy tome. Highly recommended!
. 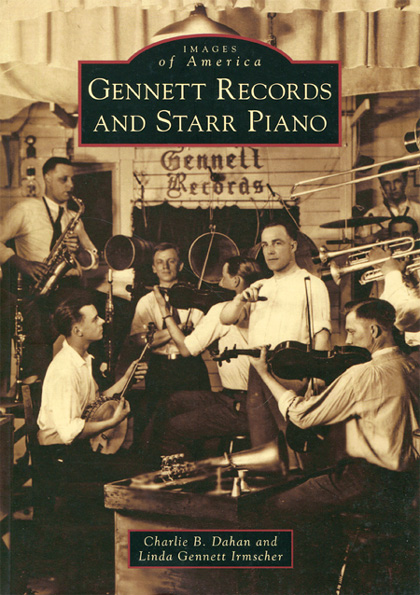 (That’s Art Landry’s Call of the North Orchestra on the cover. At the top, you can see the heavy drapes that contributed to the Indiana studio’s notoriously muddy acoustics.)