John O. Prescott ranks high on the list of undeservedly forgotten recording pioneers. Although eclipsed by his brother Frederick (founder of the International Zonophone Company and the Berlin-based International Talking Machine Company, the producers of Odeon records), John O’s accomplishments — which ranged from co-founding what would become the Nipponophone Company in 1910 to serving as Gennett’s chief technician in the 1920s — were equally impressive.

The American Record Company discs — nicknamed “Blue Indian records” by the trade, for their distinctive blue pressings and American Indian trademark — were quite successful until Columbia succeeded in shutting the company down for patent infringement in January 1907. [1] The partnership split, with Ellsworth A. Hawthorne and Horace Sheble regrouping as the Hawthorne & Sheble Manufacturing Company, and John Prescott going his own way. Little more was heard of Prescott until November 1907, when The Talking Machine World reported, “He left last week for a fortnight’s hunting on Long Island, and on returning he may have something of interest to announce to the trade relative to his work in a fresh field.” [2]

The “something of interest” probably was the Twoforone Champion Record (presumably a double-sided disc), for which Prescott filed a trademark application on February 24, 1908. [3] Prescott had been quietly preparing to resume record production ever since the collapse of the American Record Company. In January 1907 he had applied for a U.S. patent on a new pressing process that included a provision for double-sided discs. [4] Two months later, TMW reported that he had taken over the former American Record Company studio, which he was managing in the guise of “The Laboratory Association.” [5] But with the means of production all in place (but not the necessary patents, assuming it was to have been a lateral-cut disc), Champion apparently failed to launched.

Instead, Prescott retired to his home in Summit, New Jersey, where his new neighbor was brother Fred (who, having sold his interest in International Talking Machine and returned home a wealthy man, was now happily engaged in his new hobby of raising chickens). But Prescott could not remain idle for long, and in May 1909 he sailed on the Lusitania for what was to have been a brief visit to London. Instead, he ended up on an extended tour that took him from England and France (where he was highly impressed by Emil Pathé’s demonstration of the vertical-cut disc) to Russia, then on to China and Korea—and, finally, to Japan, where his career would soon take an unexpected turn. Prescott was no fan of the country, as he made clear upon his return in August 1909. “Excuse me from permanently living in Japan,” he declared. “The beautiful pictures we see there of entrancing landscapes … are on postal cards only … Nobody has any money excepting the very rich, and they are comparatively few in the teeming millions of ordinary Japs.” [6]

Back in the U.S., Prescott leased the Laboratory Association studio to the Sonora Phonograph Company in September 1909. The company was planning to produce its own discs in both vertical- and lateral-cut formats (Sonora’s April 1910 TMW ad depicted a vertical-cut Sonora disc and a lateral-cut Crown disc, although the latter is not known to have been produced). However, Prescott does not appear to have had any involvement with the company, other than as landlord. The studio initially was managed for Sonora by former Zonophone engineer George Cheney, who departed for Phono-Cut before production got fully under way. [7]

In the meantime, Prescott had returned to Japan, despite his professed dislike of the place. In January 1910, The Talking Machine World reported that he was managing a recording studio in Tokyo. [8] The owner of that studio (whose name was not given by TMW) was the Japan-American Phonograph Manufacturing Company, Ltd., the only record manufacturer operating in Japan at that time. [9] Financed, owned, and managed by American businessmen, including Prescott, the company initially produced the Symphony Record label.

The now-rare Symphony label was soon supplanted by the Nipponophone brand. Nipponophone got its start as the sales agent for the Japan-American Phonograph Manufacturing Company. (Author’s collection)

Japan-American’s sales agent was the Nipponophone Company, which soon substituted its own Nipponophone label for Symphony. By the autumn of 1910, the Japan-American / Nipponophone combine was producing and marketing records on a fairly large scale under Prescott’s management. 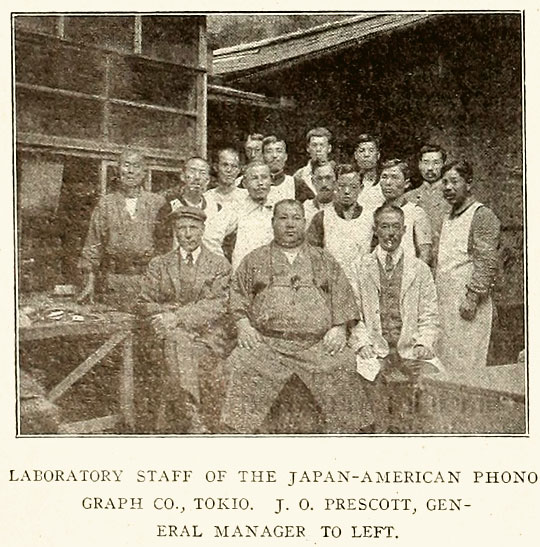 In addition to his expertise, Prescott brought along a ready-made catalog of Western recordings — the American Record Company masters. Nipponophone’s “Foreign Records” catalog of c. 1910–1911 included a substantial number of old American recordings that were renumbered and offered in new couplings, sans artist credits, with the occasional amusing mistranslation  (“A Gay Gossoon” became “A Gay Cartoon,” “Dream of the Rarebit Fiend” became “Dream of the Rabbit King”). [10] The records were intended for foreign residents and tourists, but demand for them must have been meager, and they are extraordinarily rare today. A badly damaged specimen, showing the original American numbers in the wax, was found on the West Coast many decades ago. A second specimen was later reported, but as so often happens, the supposed owner did not respond to a request for a confirming photograph or other proof of its existence.

By the end of 1910, Prescott had enough of Japan. He resigned from the Japan-American Phonograph Company, and his place was taken by Thomas Kraemer, [11] who had been associated with the Hawthorne & Sheble Manufacturing Company. Prescott’s stay had done nothing to improve his opinion of that country, its climate, or its workforce. Upon his return to the States in early 1911, he complained,

“The air is so humid that you soon fall into a condition of lassitude difficult, if not impossible, to overcome. To be sure, if you can adapt yourself to Oriental ways; that is, take things as they come in an indifferent, easy-going way, perhaps one could manage. An active American, coming from home full of life, snap, and ginger, and wanting to take hold and accomplish something the way we do it here, is forced to give up or become Orientalized. Excuse me, I am not built that way.” [12]

In June 1911, Prescott departed once again for Europe, where he “expected to look the trade over a little” before attending the coronation of George V in London. [13] Perhaps not coincidentally, his trip occurred at about the time that the London-based Disc Record Company, Ltd., acquired some American Record Company masters, which were parceled out to Britannic, Defiant, Pelican, The Leader, and other minor labels for the British and export markets. Whether the masters came from Prescott, from the Lindstrom organization (which had taken over the International Talking Machine Company’s assets), or from some other source, has not been established.

Little more was heard of John Prescott until August 1912, when The Talking Machine World reported that he had been in Constantinople for “a year or more,” managing an unnamed record company. [14] For the next eight years, Prescott’s name would be largely absent from the American trade papers.

Prescott eventually resurfaced in the 1920s. In 1920, brother Fred had placed some rather boastful ads in The Talking Machine World soliciting work as a consultant, but it was John who landed a steady job, at the Starr Piano Company’s Gennett Records division in Richmond, Indiana.

In August 1921, Gennett resumed recording in Richmond, after a hiatus there of nearly five years. [15] John Prescott was hired as chief technician of the Richmond facility, with duties that included wax formulation and oversight of the pressing plant. He also seems to have had some say in regard to master approval, and notes referring to “J. O” are sprinkled throughout the Richmond recording ledgers of the mid-1920s. It’s tempting to speculate that he was responsible for naming the company’s budget-priced Champion label, hearkening back to his aborted 1908 venture, but documentary evidence of that is lacking.

The “Blue Indian” man finally came face-to-face with actual Indians in May 1926, as part of a Gennett team that traveled to Arizona’s Grand Canyon to record traditional Hopi songs. The expedition was undertaken in association with the Smithsonian Institution, under the supervision of Dr. J. Walter Fewkes, head of the Smithsonian’s Department of Ethnology. Music Trade Review reported that the Santa Fe Railroad was assisting in moving the recording apparatus from Richmond and had obtained government permission to transport the Indians and their ponies the one-hundred miles from their reservation to the Grand Canyon.

Along with Gennett recording engineer Ezra C. A. (Wick) Wickemeyer, Prescott oversaw the cutting of fourteen masters (# 12526 – 12537, with a single take each for first ten sides, and two takes each for last two) in a makeshift studio at the El Tovar Hotel. The company, having experienced mixed results in its initial attempts at electrical recording, dispatched its more trustworthy acoustic equipment. Twelve masters were received in Richmond on June 2, followed by the two alternate takes on June 15. The masters were processed for commercial release under standard Gennett catalog numbers, after which they were deposited with the Smithsonian. [16]

Exactly when Prescott left Gennett has not been discovered, but he apparently continued to work in the sound-recording field at least into the early 1930s. On January 27, 1929, he and Frederick A. Kolster filed a patent on a photo-electric sound-recording system that they assigned to the Federal Telegraph Company of Newark, New Jersey. [17] After that, Prescott’s trail grows cold. He died in Pasadena, California, on July 14, 1946.

[3] Prescott, John O. “Twoforone Champion Record.” U.S. Trademark application #32,975 (filed February 24, 1908). Prescott was well acquainted with double-sided pressing methods. American Record had pressed double-sided discs as special-order items, under Ademor N. Petit’s patent #749,092, which was controlled by Frederick Prescott. Assuming the Twoforone was double-sided and had been launched in a timely manner, it likely would have beaten Columbia’s Double Disc to market.

[15] “Starr Recording in New York.” Talking Machine World (February 15, 1917), p. 100. Gennett recorded in Richmond during 1915–1916, using often-obscure Midwestern artists. Recording activities were moved to New York in late 1916 or early 1917, to take advantage of better-known East Coast talent and accommodate those who “found it rather inconvenient to travel out to Richmond.” Regular recording sessions resumed in Richmond on August 20, 1921, according to the Gennett ledgers.