One of the easiest way to determine pressing plants for RCA Victor’s later 78s and early 45s and LPs is from subtle clues in the label design. Victor revealed them in the Standardizing Notices pictured below in 1947 (for 78s) and 1950 (for 45s). For 78s, the clues lie in the concentric rings, and their spacing relative to the circled RCA logo; for 45s, in the placement of a double hyphen within the upper text circle.

“Canonsburg” refers to RCA’s auxiliary plant in Canonsburg, Pennsylvania, which opened in 1947. In 1950 it was converted to a 45-only plant, then was closed in 1953.

(This is an expanded version of an article that originally appeared in 2011 on the Mainspring Press website. © 2016 by Allan Sutton)

By 1905 the lateral-cut disc record had assumed the basic form that it would take for the next four decades. Brittle shellac-based thermoplastic compounds — basically unchanged since their first use in Berliner’s discs in the 1890s — remained the standard pressing material. The notable exception in the United States was the Marconi Velvet Tone disc, a semi-flexible laminated celluloid disc produced by the American Graphophone Company (Columbia).

Capitalizing on Guglielmo Marconi’s reputation as the inventor of radio, Columbia offered him a position as “consulting physicist” in 1906. On August 16 of that year, the New York Times reported that Marconi had sailed for the United States in connection with his new duties. Upon arrival, the inventor was treated to a whirlwind tour of Columbia’s Bridgeport, Connecticut plant, then was shuttled to a lavish banquet at New York’s Waldorf-Astoria Hotel as Columbia’s guest of honor. Edward Easton, Victor H. Emerson, and other Columbia officials spoke briefly, vaguely alluding to Marconi’s experimental radio work without mentioning how it might possibly relate to phonograph records.

Marconi boarded a ship back to Italy the next day, after telling a reporter for The Music Trade Review that he had not yet given the matter sufficient study to announce any new ideas. Little more was heard of the alliance until February 1907, when Columbia dealers received advance copies of the first Marconi Velvet Tone Record catalog. The records, bearing Marconi’s portrait and facsimile signature, were advertised as “Wonderful as Wireless,” although they used ordinary acoustically recorded Columbia masters.

Marconi, however, apparently had no hand in developing the discs that bore his name. His sole contribution appears to have been allowing Columbia to license his name and likeness. Searches of U.S. and Italian patents have consistently failed to reveal any filings by Marconi that might relate to these discs.

However, on July 9, 1906 — nearly six weeks before Marconi’s brief visit to the States — Columbia’s chief engineer, Thomas H. Macdonald, had filed a patent application on a flexible, lightweight laminated disc with a celluloid playing surface:

Thomas Macdonald’s patent on the “Marconi” disc even specified the embossed pattern that is found on the reverse sides. There is no reference to Guglielmo Marconi anywhere in the patent filing. (U.S. Patent & Trademark Office)

Macdonald’s patent wasn’t approved until August 6, 1907, by which time the Marconi discs had already been in production for six months. In the meantime, Columbia’s chief recording engineer, Victor Emerson, had filed his own patent on a disc pressed from a shellac–celluloid compound, which he promptly assigned to American Graphophone. Although it’s certainly possible that this or a similar mixture, rather than pure celluloid, was employed in the Marconi discs, chemical testing would be required to determine if that was the case: 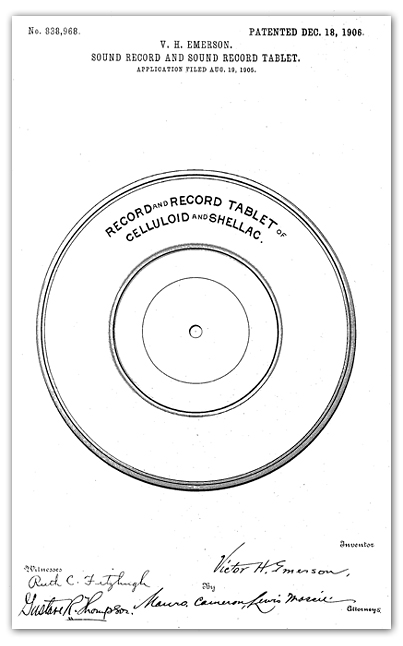 Victor Emerson’s 1906 patent for a hybrid celluloid-shellac disc. Emerson also patented a laminated shellac disc, which Macdonald then refined and patented himself. Assigned to American Graphophone, it became the basis for the familiar Columbia laminated pressings.

Macdonald’s patent specifications were exactly those that would come to be embodied in the “Marconi” discs. Macdonald specified a flexible paper or cardboard core laminated between two thin sheets of celluloid — one to receive the impression of the sound recording, and the other to receive either a second sound recording or “a roughened surface…covered by fine lines close together and crossing at right angles.” Columbia addressed Macdonald’s claim that needles need not be changed after each playing by marketing semi-permanent gold-plated needles for use with the records. 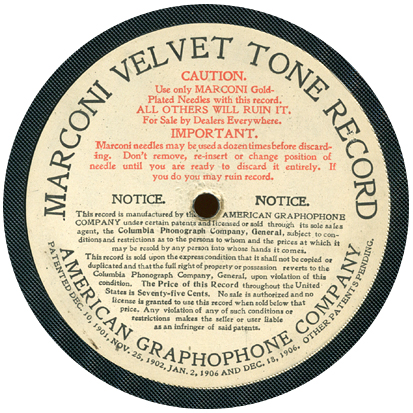 Marconi discs carried a large warning sticker on the blank reverse sides. The “fine lines close together and crossing at right angles” specified in Maconald’s patent can be seen on the outer edge.

The surface quality of the celluloid Marconi Velvet Tone Record was indeed exceptional for its day, especially when compared with Columbia’s standard, rather gritty shellac pressings. Columbia was soon manufacturing Marconi-style records for export as well as domestic sales, and even produced some double-sided issues and a few pressings from imported Fonotipia masters.

Sales lagged, however. The records were more expensive than the ordinary Columbia pressings they duplicated, and the surfaces could be badly damaged if played with ordinary steel needles. They tended to slip on the turntable despite the textured reverse sides. Production was discontinued in 1908, and by 1910 the discs were being remaindered by a New York department store for 17¢ each, and a packet of the once-pricey gold-plated needles was given free with larger purchases.