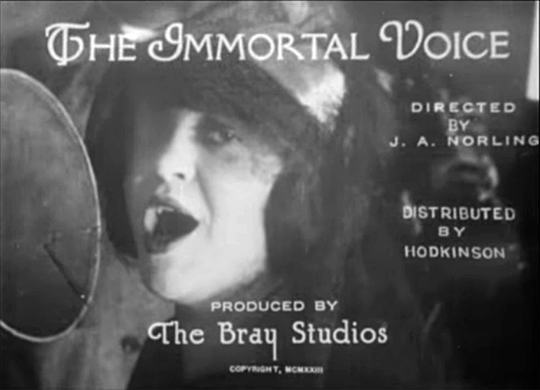 An incredible find from the Library of Congress — Bray Studios’  1923 silent film, The Immortal Voice. Now posted on YouTube, it takes the viewer through Columbia’s entire recording and production process.

Filmed in Columbia’s New York studio and Bridgeport, Connecticut factory, it begins with an acoustical recording session by Rosa Ponselle and orchestra — staged for the camera, of course, but giving a good idea of how a real session might have looked, and how closely the musicians had to huddle (look for the horned Stroh violins, a necessary evil in the acoustic days).

From there the film traces the path of the wax master, from auditioning and plating to the pressing of a finished disc. At the end is a surprise tribute to Victor’s Enrico Caruso, with footage purporting to be him onstage at the Met — making it pretty unlikely that the film was commissioned by Columbia.

Our thanks to the ever-vigilant John Bolig for passing along the link.