The Victor Talking Machine Company files prior to 1938 rarely list band and orchestra personnel, including its own (the pre-1938 Victor personnel listings in discographies like American Dance Bands are not from the recording ledgers, for the most part) — but this Victor roster offers valuable documentation of the Victor house orchestra’s chief members in 1904. This group was responsible for most of Victor’s orchestral accompaniments (which had just begun to replace the usual piano accompaniments at the time) in addition to the recordings it made under its own name. Arthur Pryor, who originally conducted the studio orchestra according to recording engineer Harry Sooy, had recently resigned to form his own band, leaving the group in Walter B. Rogers’ capable hands.

This group was originally assigned to Victor’s Philadelphia studio, then moved across the river when the Camden studio opened in 1907. (Despite what many discographies say, Victor did not operate a studio in Camden from late September 1901 until November 6, 1907; see Camden, Philadelphia, or New York? The Victor Studio Conundrum for details.) Victor’s New York studio orchestra, which didn’t become a permanent fixture until some years later, used different personnel and conductors, occasionally supplemented by “Camden men” (as the recording ledgers referred to them).

Some of the musicians pictured here, including C.H.H. Booth, were already nearing the end of their time with Victor. Others, including Theodore Levy (who later became a Victor studio conductor), remained with the company into the 1920s. Walter B. Rogers left Victor in 1916 to work for Paroquette and then, after that company’s collapse, the New York Recording Laboratories (Paramount), before joining the Brunswick staff in late 1919. 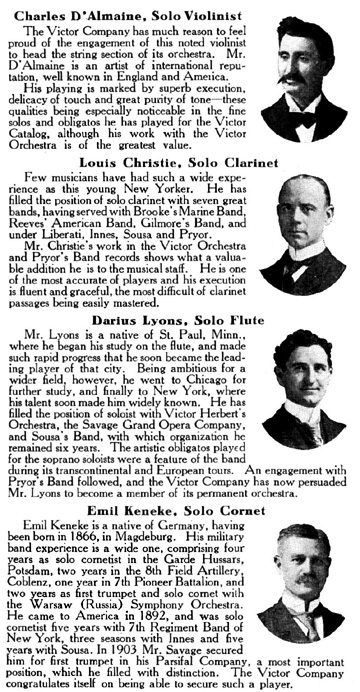 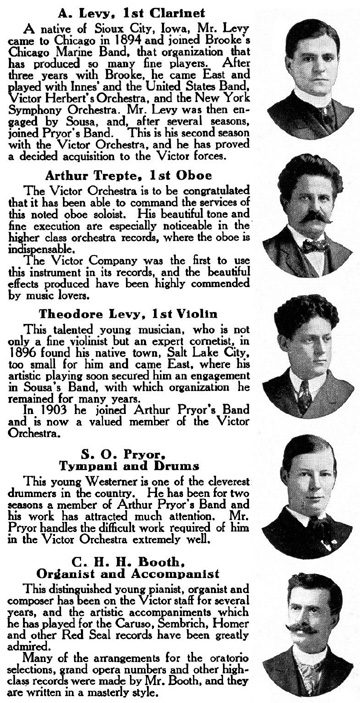